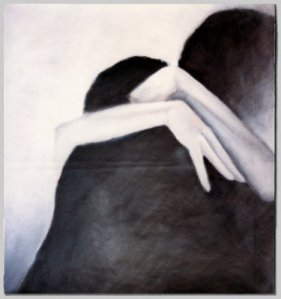 A couple of times now, I have gained consciousness while I was sleeping. Think lucid dreaming, but a little different. I know I’m asleep, or I think I am at the time, yet I can see clearly. I see DH and Li’l N sleeping soundly beside with me. I can see the clock and the time. I can see the light from the pellet stove in the next room. I can see clearly even though my eyes are closed and I don’t have my glasses on. I haven’t been able to see without glasses for 30 years! It’s been an interesting experience, but I hadn’t given it much thought until last night.

Again, the lucid state was upon me. I looked lovingly at the two sharing my bed and then I happened to look into the dark. It was in my mind’s eye, and at the same time it wasn’t. I don’t know if I can describe accurately the experience. Mere words seem inadequate. In the distance, I saw Nolan’s profile forming out of shadows. I felt a flutter in my heart, and I remember “saying” to myself or Nolan or whoever was listening “OH my God, it’s Nolan! Come here! Please come here!” and there he was. Fully formed in front of me, smiling with that twinkle in his eyes that I haven’t seen in 111 days. My heart raced, the adrenaline rushed, and I put my hands on his arms. Nolan was wearing his black Aeropostle sweatshirt that was hanging in my closet. I don’t think I noticed what he was wearing other than that. The thought came to me that every time I think of him, I think of a certain outfit he loves to wear and was surprised to see him choose that sweatshirt. He had his “gutter bangs” which he had stopped wearing recently but was one of his favorite hairstyles. I was able to touch him. I felt his arms, warm and pliant beneath my hands. I said to him “I can’t believe you’re really here!” Then I hugged him. I cannot begin to describe how that felt. He didn’t say anything to me, but he was smiling. He held me as tightly as I did him. God, it felt so good! He was taller than me still and wrapped his arms over mine, holding me to his chest like I used to do when he was smaller than me. I remember not wanting to ever leave his embrace. The waves of emotion began to flood over me and I felt myself being drawn away from him. Inside I screamed with everything I had “Wait! NO!!!!” I couldn’t stop the pull. He stayed still, smiling at me, as I was thrown into wakefulness, back into my body.

I lay in bed now fully awake, still feeling his presence. Was it a dream? It certainly could have been. It felt like more. I don’t know if I was in or out of my body. I feel like I was able to reach a place where we could both meet. My mind kicked in and pulled me back, but I really feel like I was with him for those few precious moments. I want to go back with every ounce of my Soul, I want to go back. I want to be able to spend more time in that Place In-Between; neither Here nor There, but the most special place I have ever been. There was no Otherworld around us. It was just he and I in the dark, but it was the warmest, safest dark I have ever felt.

I pray this is only the beginning of learning how to spend time with him again. Last week was so hard. I was pulled under by the Grief for a solid 5 days. I began to think I needed to be hospitalized. Seriously, it was that bad. This week I’ve been stronger. Is that the key? Each time I come out from under the Grief, I am a fraction stronger for a little while. Is this progress, or am I getting more delusional as the days pass? Honestly, I don’t care if I am. I was with Nolan for a few moments. He was smiling. I felt his arms. We held each other close, and I felt his love. If that’s crazy, then I never want to be sane again.

7 thoughts on “Hugs from Heaven”